The WOSM web browser interface communicates with the WOSM microcontroller via a plain text command set. The WOSM language allows users to write macros to control illumination schemes, detection schemes, stage position and many other parameters. Accurately timed acquisition loops are simple to write. The microcontroller can be controlled from Micromanager.

These plain text commands are fundamental to the way the controller works. They can be called from:


The command timing information in these tables shows macro timing recorded using the macro at the bottom of this page. That is a single macro, running in "fast" conditions, on the MZ board (252MHz clock). Networking protocols (HTML, Ajax and Telnet), add a latency that varies depending on your network infrastructure, network traffic and packet size. Network turnaround can vary from 100us (telnet protocol over direct ethernet cable) to several milliseconds.

The number X in the command refers the module index (0 to number of modules - 1).

Commands to control a serial run of addressable LEDs.

The 26 digital lines are labelled A to Z. 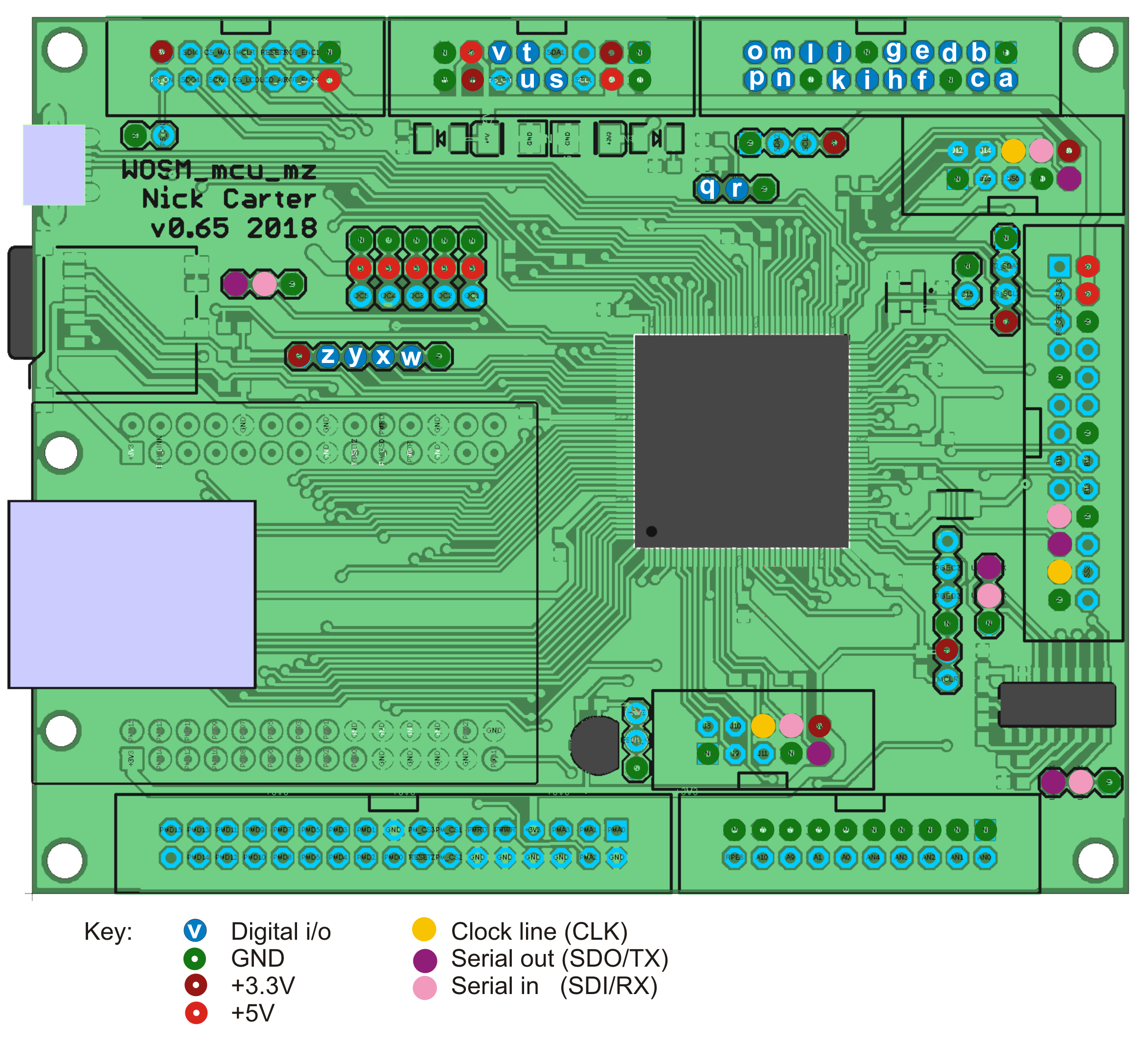 16bit counters will sum the signal pulses (3.3V TTL) on the line. Currently 16bit only. Should be capable of a few MHz (limits not tested yet..).
Counters are available on lines "q" and "r".
NB. You need to configure a line as a counter for these to work!

Motors are referenced in two characters referring to the host board (usually "m" for microcontroller board) and the motor number. The main mcu board can be configured with up to 5 servo motors (m1 to m5) and 4 sterpper motors (m6 to m9). Stepper positions and limits are defined in step units (steps or microsteps) and servos in pulse width units (in microseconds).

The power board (board reference "p") has 8 analogue out channels split into 2 groups.

Typically configured with 0 to 10V output using an amplifier set to 2x gain. These may be used for fast stage drive control (PI, Madcity etc). To drive an XYZ stage, connect to channels X, Y, and Z if you want the direction keypad keys to work sensibly.

If selected on digital i/o config page, each analog-out channel can be linked to a corresponding digital line letter for on/off control. For the lower four channels (S, T, U & V) these lines are wired directly to the power board and have an n-channel MOSFET at the analog output stage. This allows faster "ON" and "OFF" control than can be provided by the DAC.

Configure any combination of motors (mot) and analogue out (dac) for a stage interface. For example you could have a combination of stepper motor XY (mot interface) and piezo Z (dac interface) configured to control your stage XYZ.

Macros are stored in the folder /wosm/macro/ on the µSD card. You can edit them from there or more usefully via the web gui. Up to 8 macros can be loaded and running simultaneously on the wosm. On first run macros need to be loaded from the micro-SD card, this takes about 7ms on my development system but will depend on your SD card speed and macro size. Subsequent calls to the macro will be much faster (a few microseconds, not milliseconds) as the macro stays in ram. If all macro slots are full, non-running macros are removed on a 'last-used' basis when a new macro needs to be loaded. The functions below do not need the ".wml" extension part of the macro filename.

These commands will only work in WOSM macros. They will not be recognised in any other context, they'll just raise an "unknown" error.

Some commands accept a time value (eg. "pause 200ms") which needs to be interpreted quickly. The following restrictions apply to these time values:

Each macro has a limited number of local variables. These are text based.
Variables can be set within the macro, or on the macro call line.
eg.

Work in progress. These commands work with the Wosm64 data acquisition software (not with Micromanager at this stage). Mostly concerned with getting a low bandwidth image to the browser, for remote monitoring acquisition progress.

Timing information on this page is measured in the script below. The command to be timed is run 10 times in fast mode. With this digital output example you can confirm the timing on a scope. Just make sure that line q is configured to be an output.